The crisis of Black maternity: education and wellness

“I only know what they told me; I thought maybe it was my fault.”

These are the first phrases to leave the mouth of Jenese Rasberry as she recalls the unmemorable birth of her last child.

Medicinal history is dependent upon trial and error. A relationship sometimes seen as non-symbiotic, or exploitive depending on the community, has a long record of disparity, racism and propaganda toward the council of Black bodies.

In an important transition from Black History Month to Women’s History Month, Professor Jenna Reed of the Health and Sciences Dept. brought together a panel of medical professionals who specialize, research, or often cross paths in the maternity field.

February was a month with constant turn-around for events that had aim toward student education and participation.

Professionals ranging from birthing doulas and midwives to consultants that specialize in high-risk pregnancy and obstetricians sat ready to discuss and inform.

Resources like Vice Media were shown to address that as beautiful as a birth is, it is as dangerous as it can be.

Stories of negligent medical care are not uncommon in the U.S. The most recent case being that of Charles Johnson in California.

Davidson addressed the bias that is present in the medical community. Details as small as the kind of insurance a patient has creates a false profile of the patient before they’re seen for care. It may influence their access to resources in some cases.

But, amongst the errors of human behavior, the panel didn’t come to deliver bad news. They instead shed light on just how intentional the motives of maternity professionals have to be to work within the field.

Adeboyejo, an OB/GYN encourages her patients to Google their concerns so that they know how to voice them. To agree with her peer, Davidson recalls the moments when her patients taught her something, instead.

Everyone addressed the team-effort set in place for all kinds of pregnancies. Davidson said, “I had mothers who were afraid of the label high-risk. I would rather have more attention brought to [your conditions] than less.” She noted that a low-risk gestation could turn into a high-risk birth very quickly.

Forums like the one Reed helped form are commended for destigmatizing judgments and reassuring trust.

Dr. Christine Edwards of Florida Perinatal Center also notes that even though this effects the Black/brown community at such high rates, it does not mean it is only a black/brown conversation. She says, “this is more of a common conversation than a community one.”

To combat this, Adeboyejo, noted that there are protocols put in place for last-minute changes in pregnancy and delivery. The thought to change the birthing definition from four to five stages to include after-care and follow-up of delivery was also an agreement amongst the professionals.

Doula, Athena Gabriella, is an Aluma of BC and said even though her degree was in the medical field, how she services mothers, are unrelated to medicine. As more of a supporting role for the birthing process, she commends being educated for the smallest of concerns within each pregnancy. The routes taken to deliver the infant is up to parents.

In noting that 60 percent of the deaths associated with pregnancy is preventable, the seriousness of this discussion was one that caught the attention of students from different pathways. Nurses, humanity-seeking degrees, art majors and more all sat in the audience absorbing the resources that sat before them.

Moderated by Stecy Paul, an honors student who highlighted this issue in 2019, she said she was proud to have been apart of the conversation.

Ending with words of encouragement, the panelists were grateful for the attentiveness of the audience and continue to educate themselves for discussions like these to combat the issue that affects so many. 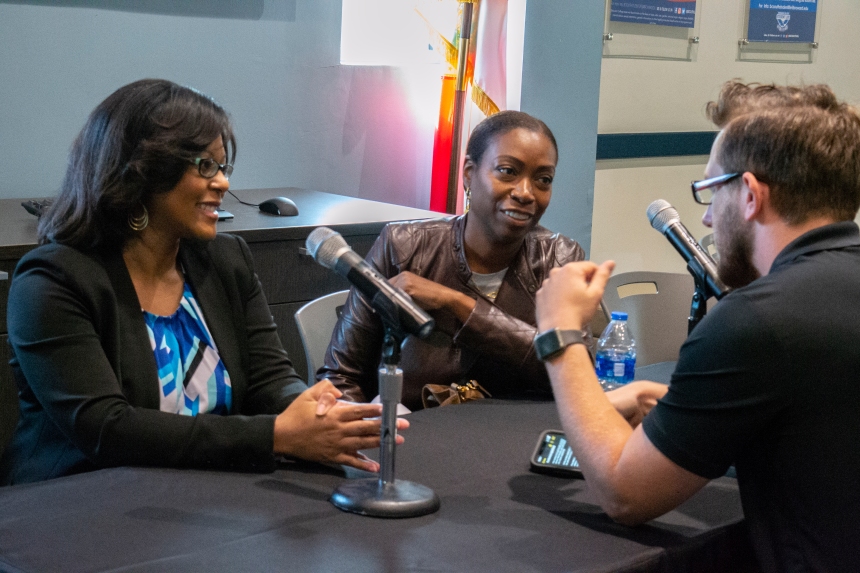