Will the XFL succeed the second time around or fail again?

Have you ever imagined that two national football leagues would exist in America? Well, Vince McMahon, CEO and Chairman of the WWE (World Wrestling Entertainment), envisioned a second football league in 2001.

Forbes Magazine reports that McMahon’s estimated revenue is around $2.1 billion, so it’s only right for him to kickstart an “xtreme” football league into the ranks.

However, Jason Duaine Hahn stated in Yahoo Entertainment that “The original version of the league promised a brand of football even more violent than the NFL, but [it] ended up costing both WWE — and broadcaster NBC — millions of dollars.”

Learning from his mistakes almost 20 years ago such as not promoting the league in time or not having another blimp incident, the XFL is back and has completely evolved from its predecessor.

The XFL inaugural season began just a few weeks ago and it’s off to a mild start. It’s very ironic that the Super Bowl aired on Feb. 2, 2020 and week 1 of XFL initiated a week later. Americans just can’t get enough of football.

On the XFL website, its mission statement says, “The XFL is a brand new, fan-first league that’s reimagining the game of football and offering fans an opportunity to experience more action, access and fun.”

“Starting Feb. 8, 2020, our eight teams will play a 10-week regular season and a two-week postseason consisting of two semifinal playoff games and a championship game on April 26.”

Sounds promising, but since this is the second league, what are some qualities of football that the XFL is changing?

“We’re evolving things just a bit. Less stall, more ball is how we describe it: a fast-paced game with fewer play stoppages. We’ve made timing changes, common-sense rules changes and created five gameplay innovations that will raise the excitement level and minimize the downtime.”

From listening to Pat McAfee to reading several sports periodicals, the XFL seems to be a minor league for upcoming/undrafted NFL picks to experienced NFL players who have some fuel left in the tank. It’s an opportunity for young players to sink their teeth into a semi-professional league while the veterans can still play and descend into retirement.

There are eight teams that make up the inaugural XFL season. On ESPN, (CEO of XFL) they aired a special segment that featured the announcement of the teams.

Featuring eight montages that. signify the cities and team name and logos, it’s no wonder how these teams seem resilient.

XFL stands as a lesser competitor to the NFL so it’s only right to change the rules up a bit. One prominent aspect I’ve noticed is that the pace of the game is faster. Whenever watching an NFL game, it takes longer than it should for the players and coaches to communicate the next play in between downs. People don’t have all day to see the teams debate whether to blitz or have a man-to-man defensive play.

Overall, week 3 is coming shortly and the response has grown over and over. Not to mention, having national cable stations like ABC and Fox air the games live on Saturdays and Sundays. Let’s see how McMahon’s second try to the XFL works out for him. 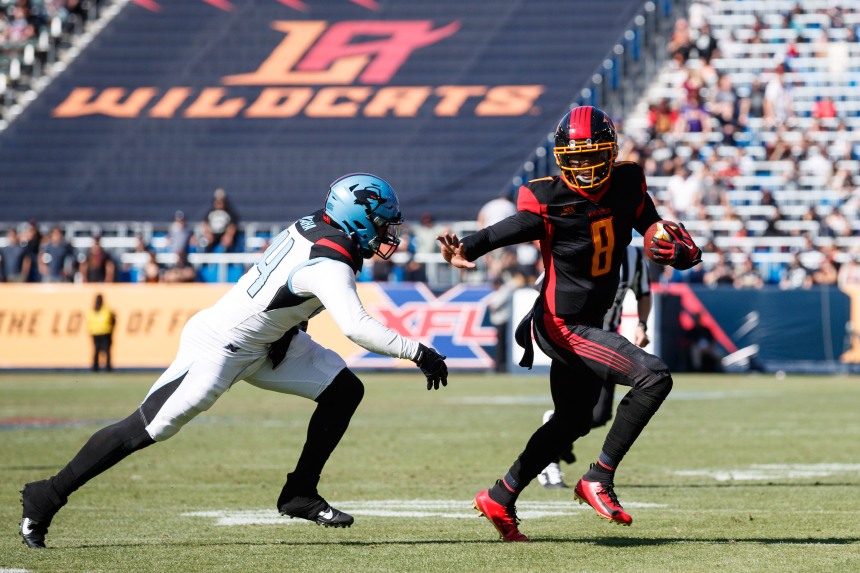 LA Wildcats quarterback Josh Johnson (8) is chased out of the pocket by Dallas Renegades outside linebacker Hau’oli Kikaha (44) during the second half of an XFL game at Dignity Health Sports Park in Carson, Calif. on Sunday February 16, 2020. The LA Wildcats lost to the Dallas Renegades 25-18. (Photo by Raul Romero Jr, Contributing Photographer)

My Tweets
Follow The Observer – Broward College on WordPress.com