If I Don’t Make it I Love You: How survivors cope

Alex Shachter was an honors student who loved marching band, basketball and bothering his sister. Joaquin Oliver was an avid sportsman loved by everyone for his dedication to fairness and equality. Helena Ramay was a model student involved in numerous activities and cared immensely about human rights.

These are a few of the lives lost during the Marjory Stoneman Douglass massacre on February 14, 2018.

For this year’s anniversary of the shooting, Broward County’s North Regional Library hosted an event promoting “If I Don’t Make it, I Love You: Survivors in the Aftermath of School Shootings,” a book that explores art therapy and the healing power of writing. Those affected by the shooting and other instances of gun violence shared their stories and struggles.

Seventeen people lost their lives and many others were injured on February 14, 2018. In remembrance of their bravery, community members are stepping forward to share their experience.

McDermott expressed that the goal of the book was to bring awareness to all victims of the shooting and how they have navigated their lives in the following years. She, along with Archer, are optimistic in the ability of Broward County to come together and find solutions to mediate the loss of life.

The first speaker, Rachel Bean, recounted her initial reaction when she had discovered that Marjory Stoneman Douglas high school, her alma mater, had been involved in a shooting.

“While I was working, my supervisor told me that there was another shooting at a high school in Parkland, Florida.  My heart dropped to my stomach and a layer of frost crept up my spine because I knew it was my high school.” Students throughout the county still feel the effects of the massacre.

Dara Haas, a survivor of the Stoneman Douglas shooting, recounts the aftermath of the shooting. “I was doing what a lot of people do and I was screaming into the Facebook void…and yelling at my neighbors…because I couldn’t understand how nothing was happening.” Haas expresses the feeling of confusion felt around the country. For her and other survivors, writing is a crucial element of processing the trauma brought on by the mass shooting. 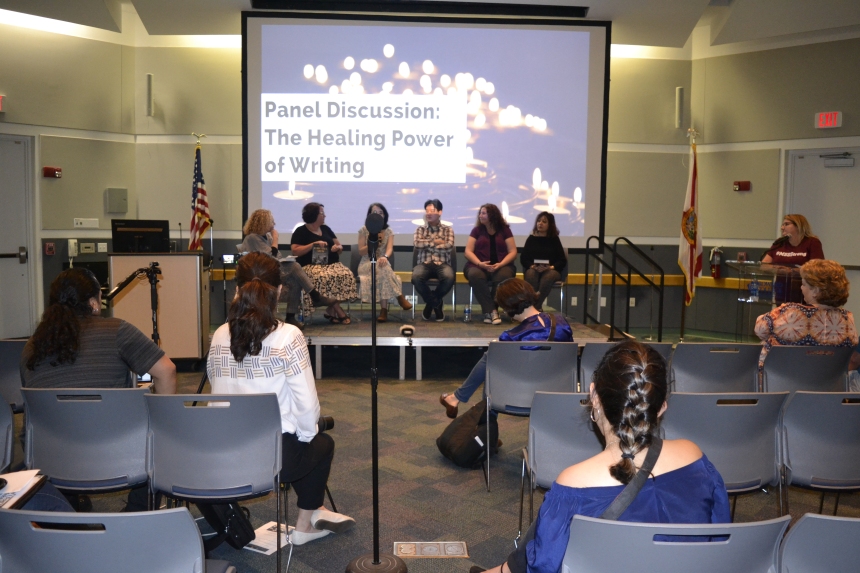 A panel discusses the healing power of writing in a book called “If I Don’t Make it I love You: Survivors in the Aftermath of School Shootings.”  /  Erick Mendez/The Observer

Happy first day back from spring break, Seahawks! If you have not checked out our Feb. 23rd issue, make sure to take a look at it! Link in bio! Let’s finish this semester strong! 🦅
TOMORROW IS THE DAY!🥳
The latest issue for The Observer is out...NOW!
You will not want to miss this free, virtual event happening this Friday!
Follow The Observer – Broward College on WordPress.com