Envision the impact of 10 minutes: What the 2020 Census can mean for you

Posted on November 6, 2019 by The Observer - Broward College

“Seven-hundred thousand [people] were eligible to be counted in Miami-Dade County for the 2010 census,” according to Jackie Colon, Southeast Regional Director of the National Association of Latino Elected and Appointed Officials (NALEO) Educational Fund.

That six-figured number was an approximate of how many people were missed during that last census and a warning of just how many more are at risk of being left out of the next Census count in 2020.

The impact of numbers plays an extensive toll on millions of people and billions of dollars when applying it to the census. As of October 2017, www2.census.gov reports that may it cost an estimated average of $15.6 billion to conduct the upcoming count.

With outside factors like immigration, employment or basic knowledge on the subject, the census’ dependence on the people’s response means that this form is not just another survey the American public can, nor should it, ignore.

The reality is that not everyone will be counted. For example, government spies, secret agents and off-the-grid individuals are just going to be missed from the count. But, for the average John like service workers, entrepreneurs and students of the like, filling out a 10-minute survey next year influences the lifestyle of the next 10 years.

What the Census does, and has been doing from 1790, is a population count. Census.gov says, “The goal … is to count everyone once, only once, and in the right place,” but a question that usually follows is if that is really possible? As the United States is constantly changing, census records show that the questions change as the society does; an issue that records also show is that responders are subjective. This leads to incomplete or even incorrect forms being returned.

The official count takes off January 21, 2020, in Alaska, according to Assistant Professor (AP) of Political Science Victoria Brower, so everyone should be prepared to submit their form – and do it quickly.

Not unfamiliar to catastrophe with counts – the 2016 Presidential election or the recent Florida Governor elections  – Broward College’s partnership with Dinner at the Square (DATS), held a dinner and discussion with representatives of varying backgrounds related to the upcoming count. 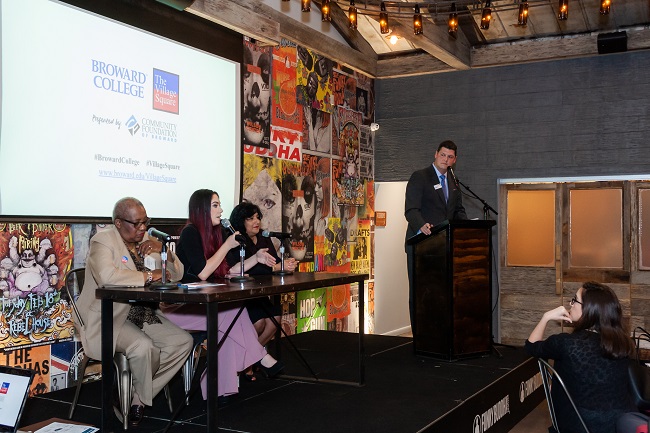 Bates of the city of Lauderhill and Subcommittee Chair of the Broward County 2020 Census Complete Count says, “it is the count of your life.” She emphasized the importance of submitting forms and ensuring that accurate numbers are re-distributed back to the state from county populations.

But in all things that relate to public resources, opinions were fired up about how the results of the Census should affect the American government. The count affects the number of representatives each state has for Congress, state allocated funds for natural disasters, other aids for just about anything free and portions of economic balance.

The evening was mild for only 22 minutes before disagreeing opinions were discussed amongst the panel. Weissert, Executive VP and Counsel to the President and CEO Florida Tax Watch, kept the night spicy by moderating and correcting some statements said by the panel.

“I don’t think the answer is to apportion representatives based on counting people who aren’t eligible to vote – it continues the same failed policies,” said Sixto, Gulf Regional Manager of Turning Point USA.

Though simple in concept, this form is complex in action. Influences of politics, legal status, bias, education, resource access and more all affect the form’s completion.

Knowing this, the Census Bureau is looking to hire as many people as needed backgrounds to have this best completed, according to Hansi Lo Wang of npr.org.

Now as a student who has been approached to apply for Census employment, many prospects go into this process:

Depending on the county, your pay may hold a hefty weight to it.

The value of the work comes from not only going out with a decent pay-by-the-hour but also knowing that each person counted is valued anywhere from $1400-2000.

The people you count are not in any form of danger by being held accountable for their existence within the country.

For us who don’t know, Article 1, Sec. 2 of the Constitution mandates this count occur every 10 years. Census.gov says the cost per household is to be reduced $13 as compared to the 2010 census, so the cost will be $107 per household unit next year.

Where Dinner at the Square hosted political individuals in the debate, BC’s Village Square (VS) held an event to educate students on how basic statistics gathered from the census affect their daily lives. Relating more to South Florida’s demographics, Professors: Victoria Brower, Alon Parker and Kaya Hamer-Small broke down the impact of the census from fields of Political Science, Geography and Sociology.

Both ‘squares’ consented that every person should be counted, but they were applied differently. DATS focused more on the reapportionment of representatives of the state and where they should go; VS highlighted the communal effects and demographics that the census documents.

2020 is the start of a new decade – one many of us will experience as the starter of our adult lives. From voting in the next election to accounting ourselves as residents within the United States, the power of just one person brought to attention can influence the next decade of lives we live.

Hopefully by the time the Census comes around everyone is on-the-grid, countable and aware.