Posted on October 11, 2019 by The Observer - Broward College

Growing up, we are groomed to believe that sports only include aggression, fierceness and toughness.

Through these three qualities, one main ingredient is what is supposed to make up the entire recipe of what sports are all about: men.

As children, we are placed on co-ed teams.

When I was small, I played baseball and soccer.

Of course, all of my female friends, along with myself, were positioned on the safest part of the field, while all of the boys were able to get down and dirty.

As I grew up, I came to the realization that sports really are a male-dominated world.

If you are a woman who plays sports, it is always “she plays for the women’s team,” but when a man plays a sport, he is recognized without specification.

I understand that there is a big difference between the two, but has it always been this way?

If we did not grow up under these pretenses, would we still see it that way?

If 2019 has taught us anything, it would be that gender specification is not only unnecessary, but there is no right or wrong answer to it at the end of the day.

In a group of people, or even alone in my room, talking to myself, I am the first one to preach about gender equality and women’s rights.

I know I am not alone in this.

The world views women as less than when in comparison to men.

We don’t have time to be a full-time athlete, we have to be mothers first.

We have to make sure the house is clean and the kids are fed. When, in that time frame, would we have time to play a sport? Professionally to say the least.

When women athletes have a child, they are expected to have their careers come to an end, permanently.

In comparison, men could literally do whatever they want and it will never matter.

Because they are athletes.

When you work in such a male dominated world as a man, such as the athletics world, the very bare minimum is expected of you. If you do anything slightly above average, you’re praised.

Even if you take a different route and break the law, or many, it does not really matter. It does not affect your career, your social life or anything of importance.

There are men who break the law daily and go to prison for life. They are beating their wives and girlfriends, they are stealing and shoplifting, they are really going wild in public.

But you know what they are not doing?

They are not getting fired.

They are getting a slap on the wrist and a bunch of publicity.

If a woman did anything like this, she would be reprimanded immediately.

She would be fired on the spot, and lose all of her sponsors, along with the respect of her peers.

I hope that by the time I have children of my own, this is not the case.

I hope that one day, women can play sports and not feel like they are less than their male counterpart. 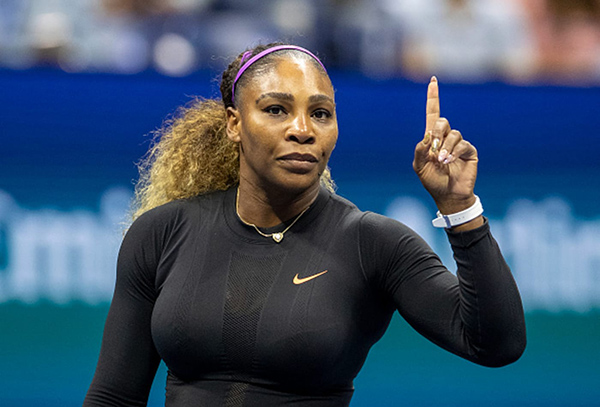 Serena Williams playing tennis as one of the best in her sport.  Photo courtesy www.thenational.ae

Which, to be honest, I don’t know which one is worse.

The age gap that women already face is pretty bad.

But when comparing a male athlete’s salary to a woman’s, it almost becomes shameful.

Some would say it is.

Men are bringing in millions of dollars, while women barely scrape the surface of a couple thousand.

In what way is that fair? Or logical? Who even came up with these numbers?

I am not saying that the women work harder, or not as hard, as the men do and vise versa.

All I’m saying is that the way women are viewed in sports is in no way proper, fair or equal.

Playing a sport is amazing. Being an athlete is great, even if you’re not the best at it.

But when you’re a man, it’s even better.

It shouldn’t be that way.