Posted on February 11, 2020 by The Observer - Broward College

Do you ever want to let go of life while listening to music? Stressing out over work, school, relationships, brings mental exhaustion to yourself, but music can provide a relaxing sensation to calm the mind with amusement

After a long hard day, I looked through my small Vinyl record collection and thought of a Henry David Thoreau quote. “When I hear music, I fear no danger. I am invulnerable. I see no foe. I am related to the earliest times and the latest.”

As my fingers touched each album, my eyes locked onto one of my favorite records, the self-titled Audioslave album.

Audioslave’s self-titled and debut album released on November 19, 2002, and became an instant success since it “later certified 3x platinum by the Recording Industry Association of America in the United States.”

Audioslave created catchy and straightforward songs, yet their chemistry is unlike what most people hear. If you sit down and listen to each song, you’re instantly in another world of experiencing music.

In Audioslave’s first record, there are 14 songs, yet four stand out. You can hear the band’s best moments through heavy guitar riffs, a basic yet pulsating drumbeat and Chris Cornell’s unforgettable melodic voice.

If we start with “Show Me How to Live,” the song greets us with a simple four-beat by the drums as well as the guitar and bass playing a thumping and pleasant-sounding riff throughout our ears.

Cornell’s humble and baritone voice naturally meets with the other members. Cornell sings about asking “for help from God, saying that he created him, but now needs his guidance. From what my ears heard, I felt the song talk about how fragile life is, and we only have such limited time to spend it.

Furthermore, “Set It Off” fills your ears with a guitar riff and booming drum beat that gets you in the mood to get up and move.

The significant aspect of this song includes the imagery of what the album art portrays. The first verse states, “He was standing at the rock, gathering the flock, and getting there with no directions and underneath the arch, it turned into a march, and there he found the spark to set this f***er off.”

I felt that it’s about how life can present your fragile possessions that are beneficial or obstructive.

Tim Commerford best displays a prominent bass player by using a three-finger technique that spreads across the bridge of the bass guitar. This allows the thick and flexible strings to be played with a dense and brash sound.

In “Bring Em Back Alive,” Commerford’s bass line resides as the backbone while Brad Wilk plays the same rhythm and Tom Morello reflects with a somber solo. It’s not so much the lyrics that pull you in; it’s how each member shines in their way.

Lastly, Like A Stone remains the most popular song they’ve manifested yet still catches your ear. Specifically, the lyrics. The lyrics misguide one into thinking it’s talking about one thing while it’s about something else. Chris sings, “In your house, I long to be, room by room, patiently, I’ll wait for you there, like a stone, I’ll wait for you there alone.”

Tim Commerford puts it in an interview “When Chris wrote that song, he fooled me. I thought it was a love song. He says I’ll wait for you there like a stone, and I was like, what are you waiting for, bro? He said, “I’m waiting to die.” I would’ve never guessed that this predicted Chris Cornell’s untimely and tragic death.

Spiritually, the lyrics provide a real insight into what the future unfolds. Musically, it’s essential to communicate with your fellow musicians without talking.

Also, listening is a vital key to how a band and people create that magical spark and a meaningful relationship. Not to mention, the production of this album makes it unique since you can hear the intimacy between the musicians and how each instrument is recorded up close but not so loud.

Please listen to this album as it can help you through a rough time. 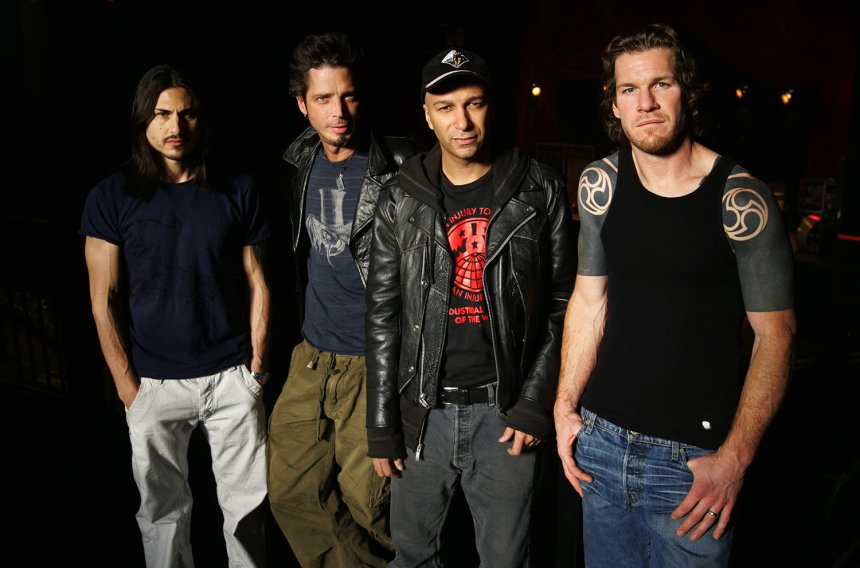 Audioslave photographed on May 1, 2005, in Washington, D.C./Photo Courtesy of billboard.com